Adventurers make it to Arctic Circle after mammoth 6-day adventure

A TEAM of adventurers became the first people to travel from Scotland to the Arctic Circle over six days in six metre RIBs (Rigid Inflatable Boats) on July 3rd.

Seven men and one woman made the journey as part of the GORE-TEX® Arctic Challenge, battling rough seas and a 10-hour, 220 mile night crossing from Shetland to Maloy to complete the adventure.

The team, which took on the mammoth task in a bid to prove the capabilities of modern RIBs, arrived in Svolvaer in the Lofoten Islands at 8pm on the Sunday, having traveled 903 miles on water.

Pete Goss MBE, one of the crew members, said: “This has been a great trip where I have learned exactly what a RIB can do when put to the test. Thanks to a lovely group of people it has been extremely fun and Norway is breathtaking. As we came into Svolvaer we all felt immensely proud of our achievement and I truly hope it inspires others to get out onto the water and explore.”

The challenge put the crew to the test, as well as the two 6.3m, Suzuki powered Humber RIBs. On just the second day bad weather meant the longest leg of the journey – a 10 hour crossing from the Shetland Islands to Maloy in Norway – had to be delayed by eight hours and the crew were forced to make the marathon journey through the night.

After just a few hoursʼ sleep, the next day proved just as tough, with rough seas making for a physically demanding run from Maloy to Ramsay.

After the tough day, organiser Hugo Montgomery-Swan, was glad to have had suspended seats onboard, he said “Without question, Ullman seat technology has totally transformed safety and crew comfort. In nearly a quarter of a century of offshore powerboating and RIB adventuring, I have never had such a shock free ride as the one experienced on the GORE-TEX® Arctic Challenge. Ullman’s pioneering seat technology really works as I can testify firsthand.”

Highlights for the mixed experience team included swimming in the middle of Norwegian sea at night, 100 miles offshore, surrounded by oil rigs while Julian Hutson-Saxby played a specially selected guitar while bobbing in the water. The team had the freedom to explore, swim and jump in and out of the sea thanks to being kitted out in state of the art Musto HPX dry suits with GORE-TEX® technology.

The GORE-TEX® Arctic Challenge was a unique project in that the crew was comprised of professional and highly-experienced offshore adventurers such as Paul Lemmer, Pete Goss MBE, Hugo Montgomery-Swan and Mark Beeley as well as complete novices. Telegraph journalist, Bryony Gordon, was the only female member of the team and until the training for the challenge, had never done anything like it before.

She said: “I thought it would be terrifying but I have had the most amazing time and feel amazingly lucky to have been able to take part in it. I think I’ve done London girls proud.” Organiser, Hugo Montgomery-Swan, who came up for the idea for the adventure, said that it was so successful he was already planning the next.

He said: “Our experiences on the GORE-TEX® Arctic Challenge have been amongst some of the finest I have ever enjoyed afloat. The Norwegian coastline all the way up the west coast is more majestic than one can imagine and our little boats provided the very best possible means of seeing the mountains and all they hold. This is a voyage that will not be forgotten. There are more adventures on the hoizon and I would urge people to keep an eye on www.ribtothelimit.com to see what the team has planned for 2012.”

To find out more about the challenge, which was chronicled daily through blogs, photos and videos, visit www.ribstothelimit.com. 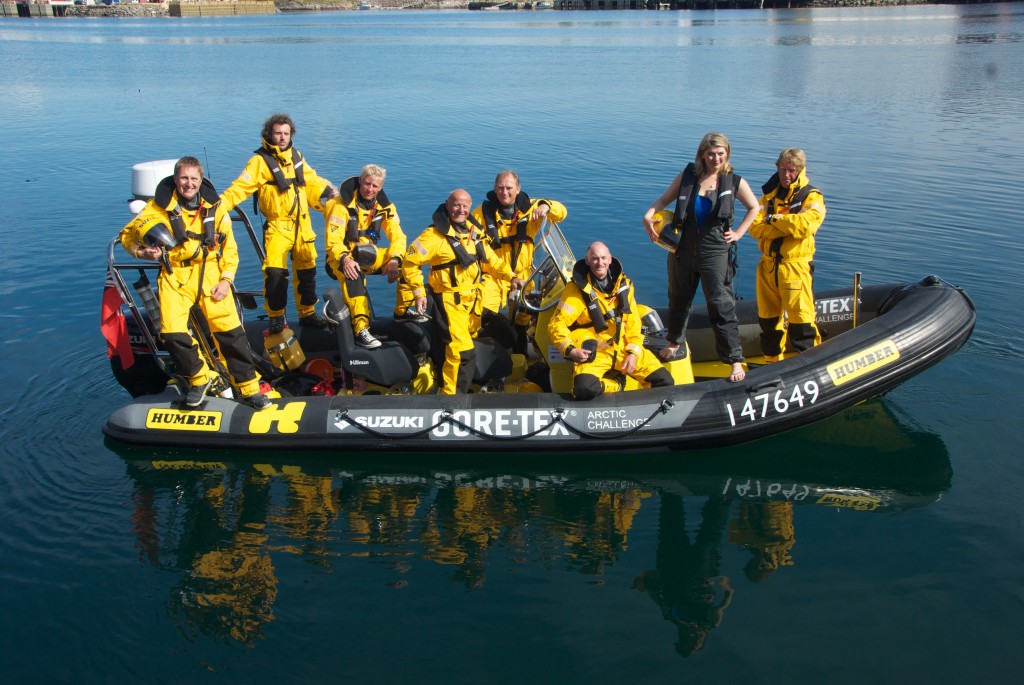